As you approach our institute building in Erlangen-Tennenlohe, it's often the first thing to capture your attention: our 58-meter radio tower. It can be seen from afar, making it a Fraunhofer IIS landmark of sorts.

The question is, what are the tower and the surrounding antennas capable of? Keep reading for an explanation. The radio tower is a key element of our research activities in the area of digital radio and television broadcasting. We test new developments in digital broadcasting using the antennas installed on the tower.

We supply the Erlangen region with a range of digital broadcast services. The campus radio »bit express«a joint effort of Erlangen-Nürnberg University and Fraunhofer IIS, transmits over our tower for instance. The radio's studios are also located at our facility. bit express transmits via digital radio mondiale, or DRM, a standard for short-, medium- and longwave digital radio broadcasts. The program operates via the 15789 kHz digital shortwave frequency using a completely new antenna specially developed by Fraunhofer IIS. bit express can also be received via digital audio broadcasting (DAB+), web streaming and 87.9 MHz UKW.

In addition, we set up a path between the Erlangen radio tower and the Nordostpark technology park in Nürnberg to test how far we can provide interference- and error-free transmission with the battery-operated, low-power transmitters that the system uses. The goal is to achieve optimal digital transmission with as little transmission power as possible for applications like wireless sensor data capture, remote monitoring (such as smart metering) or for machine-to-machine communication.

Our activities in this field have made Fraunhofer IIS one of the world's largest research institutes for communication and digital broadcasting. The results of our work can be found in a wealth of broadcast systems around the world. Not content to rest on our laurels however, we enhance and modify the array of antennas and carry out maintenance on the equipment installed up on the tower. Only specially-trained employees are allowed to ascend the tower to perform this work however..

You are looking for more information? Please visit the websites of our Research Area Communications. 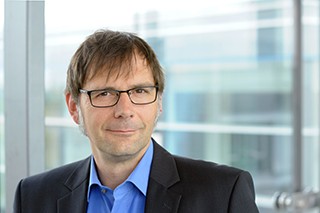