The course is set: now the Leistungszentrum Elektroniksysteme (LZE) (High Performance Center for Electronic Systems) is embarking on its mission to establish itself as the leading center for electronic systems in Germany. Energy saving and energy efficiency – this strategic collaboration between research and industry is focused on nothing less than these key economic and social topics of the future. Something is happening at the heart of the Nürnberg Metropolitan Region about which others can only dream: world- class research with a well-defined practical orientation.

Thursday, November 19, 2015. The Leistungszentrum Elektroniksysteme (LZE) hosts its first Tech Day. High-level visitors have registered for the event in large numbers: some 100 repre- sentatives of industry and business – from medium-sized companies to global corporations – have turned up. Among the crowd are representatives from big-name industrial companies, leading automotive manufacturers and suppliers, internationally renowned manufacturers of sporting goods, automation technology manufacturers, small energy technology businesses, and companies from the textile industry. “What we show our partners and potential customers at the Tech Day is targeted world­class research with a well­defined practical orientation,” explains Prof. Dr. Albert Heuberger, Director of Fraunhofer IIS in Erlangen.

At the Fraunhofer Institute for Integrated Systems and Device Technology IISB, Prof. Dr. Heuberger and the Director of Fraunhofer IISB, Prof. Dr. Lothar Frey, jointly lead a tour through a small but excellent exhibition. At four stands, researchers from both Fraunhofer institutes and the University of Erlangen-Nürnberg proudly present the mature prototypes of their current LZE projects. “They are our lighthouse projects,” says Professor Frey with a satisfied smile. “They demonstrate that our teams can tackle complex electronic systems with a unique range of expertise.” Total initial investment for the LZE amounts to €10 million and comes in equal parts from the Bavarian Ministry of Economic Affairs and the Fraunhofer- Gesellschaft, while a further €5 million comes from joint projects with industry.

2 | High-tech with a practical edge: During the pilot phase, the LZE has €15 million in funding to work with.

Standing at one of the stations is project manager Dr. Nadine Lang, who holds a PhD in biophysics. The monitor on the table shows the data curves for various vital signs. Beside the monitor lies a white T­shirt. Lang explains what makes the FitnessSHIRT special: “We’ve developed a new method of measuring and recording various health data using smart textiles.” Anyone who sets out on a run or hops on a bike to meet their fitness target for the day is familiar with the dilemma: a device attached to a tightly fitting measurement harness shows the pulse rate, but is the breathing rate OK too? Does the heartbeat actually change with the physical exertion? “Thanks to the sensor electronics integrated in the FitnessSHIRT, the pulse, breathing activity, and movement intensity can be simultaneously recorded, evaluated, and displayed on an app,” explains Nadine Lang, who enjoys climbing and cycling in her free time. Now the project team under Nadine Lang has combined the FitnessSHIRT’s sensor technology with the radio-based real-time positioning technology RedFIR®, which was also developed and subsequently refined at Fraunhofer IIS. This means that the shirt can record positional and movement data at the same time as ECG and breathing. In addition, the scientists have developed new kinds of algorithms that enable users to interpret and analyze ECG signals, such as heart rate variability. Nadine Lang explains: “As a result, you can do things like ‘track’ a whole soccer team in real time. Coaches receive a package of useful data for every player.” Yet “Low-Power Electronics for Sports and Fitness Applications” is just one technological field in which researchers at the Leistungszentrum Elektroniksysteme (LZE) are continuously working.

A pioneering collaboration that acts as a beacon

In January 2015, the LZE began its two­and­a­half year pilot phase. The joint initiative between the Fraunhofer-Gesellschaft, its two Erlangen-based institutes Fraunhofer IIS and Fraunhofer IISB, the Friedrich­Alexander University Erlangen­Nürnberg (FAU), further non­ academic research institutions, Siemens, and other partners from industry is a pioneering collaboration that acts as a beacon. “We see the LZE as a pioneering model for the Nürnberg Metropolitan Region,” says Professor Heuberger. “We’re building on longstanding, fruitful collaboration between the Fraunhofer institutes and the university and are also using the unique concentration of research and industry in the field of electronic systems in the Nürnberg­Erlangen­Fürth triangle.” Such exceptionally favorable circumstances do not exist anywhere else in Germany. Without complex electronic systems, future high­tech applications are inconceivable – whether in automotive manufacturing, in plant engineering, or in automation, energy, medical, or health technology. The commercial potential is huge precisely when – as with strategic collaborations such as the LZE – the focus is on clever solutions for smart power grids, medical engineering, electromobility, Industry 4.0, or energy efficiency. Working together with industrial partners, the LZE has big ambitions: “We want to generate traction beyond the Nürnberg Metropolitan Region and to attract national and international attention,” says Professor Frey. Accordingly, Frey stresses that the High Per- formance Center for Electronic Systems is “much more than just a large-scale collaborative project.”

Major topics of the future

The LZE is specialized in the key economic and social topics of the future: energy saving and energy efficiency. Full of passion and ingenuity, the center is taking a twin­track approach from the start. On the one hand, it is developing new types of low-power electronics designed to minimize energy consumption. Examples include the sophisticated technology in the FitnessSHIRT and in other sport and fitness applications. Other scenarios involve equally clever solutions for energy­saving integrated circuits and energy­efficient data transmission in complex communication networks, as required, for example, in Industry 4.0. On the other hand, the LZE’s activities are also focused on coming up with pioneering power electronics for applications such as powertrain technology and the future energy supply – so that elec- trical energy can be converted and distributed efficiently and cost effectively. An example of this is “Wireless Power and Data Transfer in Systems with Fast-Moving Parts,” a project that hardly anyone knows better than Thomas Heckel. On a yellow-painted, industrial-use robotic gripper arm, Heckel points to a thick wiring harness that winds along the robot axis from the base all the way to the tip of the gripper arm. “It’s all pretty cramped, as you can see. Classic industrial robots are unable to turn flexibly in order to screw, weld, or record measurement values, because the wiring harness is in the way. That’s a drawback for manufacturing.” Furthermore, the cable harness weighs up to 40 kilograms, which causes the movement of the arm to be unbalanced. But how do you make the power supply cheaper, the data transmission more reliable, and the entire electronic system smaller and more compact? “Our vision is to get rid of the cables and to develop a functional inductive technique for energy and data transmission.” And this is precisely what the project manager and his team

Enthusiastic feedback from business and industry

At the LZE’s first­ever Technology Day (or LZE Tech Day for short), the enthusiasm shown by representatives from business and industry for the ideas was very palpable. For example, the product and innovation manager of a leading automotive supplier wanted “to get up to speed with the latest technology and intensify our current cooperation with Fraunhofer.” An industrial manager for innovation electronics judged the pilot projects presented a “very promising approaches to pursue new markets.” The excitement involved in realizing something new is also tangible in the two other LZE projects, such as “DC Backbone with Power-to-Gas Coupling” headed by Bernd Wunder. This project seeks to answer the following big questions: In the context of the energy transition and the growing scarcity of fossil fuels, how can we secure our energy requirements? And how can self-produced energy be stored cost effectively and on a major scale? Fraunhofer scientists are all too aware that lithium-ion batteries, which can hold only a limited amount of energy, are not the only solution. This is why they are collaborating with the Friedrich­Alexander University Erlangen­Nürnberg (FAU) to research coupling techniques that use a chemical carrier in liquid form. Known as a liquid organic hydrogen carrier (LOHC), it securely binds the alternative energy carrier – hydrogen – like a sponge. By means of a fuel cell, the hydrogen can then be converted back into electrical energy. This method can be used to store excess energy in summer and then release it during the winter heating period. Or it can be used to balance out load fluctuations in the power grid. Last but not least, there is the “Energy­Independent Asset Tracking System for Logistics Applications” project, which focuses on extremely power­ saving electronics solutions that are needed to make the Internet of Things possible. Using the example of a high­performance logistics application, the team of researchers led by Dr. Heinrich Milosiu has developed a special low-maintenance positioning system, which allows goods in a warehouse or in outdoor areas to be located and tracked. The researchers show how spectacularly little power this radio-based solution consumes by means of a somewhat surprising demonstrator: a glowing red strawberry repurposed into a battery. Even such a weak and simple “strawberry battery” is capable of powering the wireless receiver. There- fore, the electronics used in the logistics tags – on which the data is stored – boasts very low power consumption: under ten microamperes in fact. The researchers are already working on further reducing power consumption down to just one microampere.

What the LZE defines as “research in new dimensions” is not just an integrated approach to rethinking joint electronic systems research, but is also about shortening the route from basic research to industrial applications. Ideas are already being developed for how to achieve this and what the next steps should be: research structures designed along the lines of think tanks, special investment and development teams, and new high-tech start-up business models. In any event, the bright minds at LZE have already developed technologies that – as Professor Albert Heuberger puts it – “will influence people’s lives today, tomorrow, and in the medium term”. 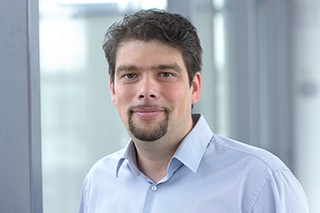 Head of Business Development and Innovation