During her master’s degree, the young scientist conducted research on 3D audio formats at Fraunhofer IIS. Her project, for which she was awarded a prize  of 3,000 euros, focused on object-based music production, developing a combined workflow for Dolby Atmos Music and 360 Reality Audio based on an existing stereo mix.

Rieger has been fascinated by three-dimensional sound since her time at university. “It’s very interesting,” she says, “that there is so much happening in the field right now,” and that as a researcher, you truly have your finger on the pulse of current technological developments. When seeking out a partner for her thesis project, it was clear to Rieger that she needed to find a distinguished institution in the field of audio technology to provide her with the right resources to study this complex topic. This search led her to Fraunhofer IIS, which had collaborated on master’s theses in this field in the past.

In the SoundLab group headed by Dr. Ulli Scuda, she studied how different workflows based on the new Dolby Atmos Music and 360 Reality Audio technologies could be used for object-based music production. Rieger then used a stereo music mix to develop a combined workflow using these two sample technologies. In its essence, her work showed that it is crucial to establish multi-format production workflows and standardized conventions for archiving, conversion, and exchange between various formats in object-based audio, particularly in music and radio production.

Yannik Grewe, deputy group leader of the SoundLab group, believes that Rieger’s master’s thesis can provide interesting insights for future developments in object-based music production. “In her research, Daniela Rieger made some very exciting discoveries about the combined workflow using these two systems, which are currently competitors. These discoveries lay the foundation for our future developments as well as those of our industry partners,” says Grewe.

Young female scientists in the field of audiovisual media technology are still a rarity. This grant, awarded by ARD and ZDF, two publicly funded German media institutions, aims to encourage talented women to pursue academic studies and careers in the field of contemporary media technology. Daniela Rieger not only succeeded in winning an award for her excellent work in the audio industry and making a key contribution to research in the field – she also left a lasting impression on her research partner. Fraunhofer IIS offered the young researcher a position as specialist for object-based music production and MPEG-H, a 3D audio standard developed right here at Fraunhofer.

“The grant was a major reward for a very stressful thesis project,” comments Daniela Rieger. But that is not all there is to it. Rieger also emphasized how important it is for women in this field to experience the feeling of knowing that “you are good at what you do, and you are in the right place!” The award-winning researcher plans to continue her studies in the field of MPEG-H, object-based and immersive music production, and voice recognition, adding: “These are all cutting-edge topics undergoing seismic technological shifts, and they have immense potential to shape the way audio is produced well into the future.” At Fraunhofer IIS, Daniela Rieger is in the right place not only to observe these technological changes, but also to help define them going forward.

In line with COVID-19 restrictions, a small award ceremony will be held in mid-August in Berlin. 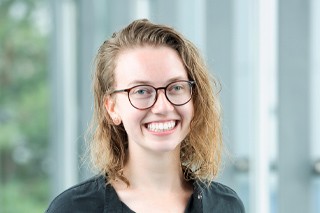