Christian Nickel works at Fraunhofer IIS, where he develops positioning and communication systems for the Industry 4.0 application “Intelligent tools as CPSs.” Find out more in the interview.

All articles from the “Industry 4.0 for SMEs” series

Technologies and solutions for SMEs in production and logistics

How sensors and AI are assisting in the assembly process

What role do humans play on the assembly line?

Christian Nickel: Humans continue to play a key role in assembly work. Compared to highly automated assembly robots, people can react flexibly to changes and perform individual work steps after very little training. Take the example of automotive assembly: this work is becoming more and more complex due to the sheer number of models. Depending on the model, each work step might require the tightening of 8, 10, or 12 screws. This must be done in the right order and without forgetting even a single screw. When humans get distracted they can make mistakes, which in turn lead to additional costs or a dent in public image.

You’ve developed a retrofit solution for handheld tools that prevents mistakes. How does this solution help assembly workers?

At Fraunhofer IIS, as part of the “Intelligent tools as CPSs” project, we developed a retrofit Industry 4.0 solution that detects any mistakes made during assembly. As soon as a work step deviates from the assembly plan, the system sounds the alarm. This allows the mistake to be rectified immediately rather than leading to cost-intensive reworking further down the line.

How does the intelligent tool work?

From the outside, the centerpiece of the solution – which is relatively easy to attach to existing tools – looks like a small black box. Within this module are sensors that measure the movements, rotations, vibrations, sounds, and magnetic fields produced by the tool and in its surroundings. AI is used to analyze and evaluate the sensor data, but in order for this to happen, we must first train the AI algorithm using machine learning. Many tasks are repetitive, such as “tighten screw,” “loosen screw,” or “rivet.” The sensor module’s AI can also learn entire sequences until it is able to identify individual work steps and check that these are being performed in the correct order. An LED lights up to let the user know that the cognitive tool has confirmed the latest work step.

How accurate is the intelligent tool’s positioning capability?

In combination with wireless positioning systems, the tool can determine its position to within a few decimeters. That’s precise enough for the tool to know whether or not it’s in the right segment of its task. Optical systems achieve a resolution of within five centimeters within the work area. This allows the intelligent tool to find the correct screw hole. Which system gets used is dictated by the quality control requirements.

Christian Nickel is a Senior Engineer conducting research in the Machine Learning and Validation group. He studied electrical engineering and communications electronics at Nuremberg Institute of Technology and has worked at Fraunhofer IIS in Nuremberg since 2015. His main areas of focus are intelligent tools, positioning, and embedded machine learning.

All articles from the "Industry 4.0 for SMEs" series

Back to the Fraunhofer IIS Magazine homepage 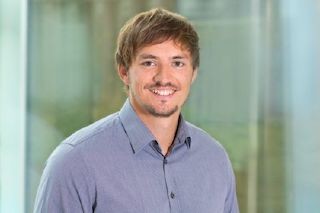