T-Mobile USA was the first operator in the world to announce the introduction of EVS in its VoLTE network in April 2016. Only one month later, EVS entered the Asian market: The Japan based operator NTT DoCoMo launched its EVS powered VoLTE service. EVS services are also available in Korea.

In June 2017, MPEG Licensing Administration (MPEG LA) announced the availability of an EVS Patent Portfolio License. The License will facilitate future deployments of EVS by providing efficient access to patents related to this telecommunications standard.

With its special features, xHE-AAC (Extended HE-AAC) effortlessly meets the requirements of digital radio and streaming services where various audio content types need to be transmitted at very low bit rates. The audio codec produces excellent sound for both music and speech, delivering unrivaled quality at bit rates starting as low as 6 kbit/s for mono and 12 kbit/s for stereo services. Thus xHE-AAC streaming apps and streaming radio players may switch to very low bit rate streams and offer a continuous playback even while the network is congested. When network connectivity recovers, the xHE-AAC player will adapt to a higher bit rate and seamlessly switch across the full range of bit rates up to transparent quality.

It also opens up the possibility to reach billions of 2G users with streaming services for the first time, especially in emerging markets such as India and Latin America. Streaming service providers benefit from drastically reduced CDN cost and a simplified encoding asset management while consumers enjoy an improved service quality and save on their precious monthly data allowance all the same.

At this year’s MWC, booth visitors will have the chance to experience how well xHE-AAC meets the complex requirements in the fields of digital radio and adaptive streaming handling all types of content at lowest and dynamically changing bit rates.

xHE-AAC is included in the AAC Patent Licensing Program by VIA Licensing at no extra cost.

Fraunhofer Cingo® brings immersive audio to VR devices and applications with a stunning level of realism to create the experience of “being there”. With more than 25 years of experience in the field of audio coding and processing, Fraunhofer IIS is a driving force in the industry in the development and delivery of truly immersive sound on VR devices, smartphones and tablets.

Cingo renders 3D audio content over headphones by incorporating head movements and as a result, sound sources can be perceived from anywhere in the 3D space around the listener. A truly immersive soundscape is of utmost importance in any VR experience and serves as a determining factor in the success of the illusion. The MPEG-H audio standard is the ideal companion for Cingo 3D audio rendering with the ability to deliver immersive 3D sound for virtual environments to mobile devices at bitrates used today for delivery of 2D surround sound. MPEG-H can carry channels, audio objects and higher-order ambisonics signals. This capability makes it the ideal VR audio codec for user generated and cinematic VR content.

MPEG-H audio has been standardized in the MPEG OMAF Omnidirectional Media Format and selected by the VR Industry Forum (VRIF) as the only audio codec for its Industry Guidelines (http://www.vr-if.org/guidelines/).

In addition to immersive sound, the Fraunhofer Cingo renderer also enables an excellent surround sound listening experience over stereo speakers or headphones while providing existing stereo content with a more natural and clear sound. It includes features such as loudness optimization for listening in noisy environments and improves the intelligibility of dialog and commentary.

Cingo has already made a global impact with the integration into Google’s Nexus and Pixel family of devices, Google Play Movies & Music, Video Player apps by Mobile Operators such as Korean Telecom (KT), SK Broadband and LGU+. It is also making headway in the world of VR thanks to its integration into Samsung’s first generation of Gear VR, LG’s 360 VR headset and the Hulu VR app for mobile and tethered experience.

MPEG-H 3D Audio is the first next generation audio system worldwide to be used in a regular broadcast: since May 2017, it is operated in the regular commercial terrestrial 4K TV service in South Korea. MPEG-H 3D Audio enables immersive sound and interactivity. In the future, viewers can set the audio mix for a program to their individual preferences, for example:

Regardless of the device, the MPEG-H Audio system delivers the best sound experience possible - in the home theatre as well as on smartphones, tablets and Virtual Reality devices. At MWC 2018, visitors can experience the interactive features of MPEG-H 3D Audio on a tablet.

Ultra-Reliable and Low-Latency Communication (URLLC) is a key enabler for seamless interaction between machines in time-critical applications.

Industrial applications require a reduction of communication latency while simultaneously guaranteeing an extremely high level of reliability. All layers of the communication system need to be optimized starting from physical layer by scaling down the transmission time and enhancing reliability through increased redundancies. Upcoming LTE releases use a shorter version of the transmission time interval (sTTI) and apply enhanced functionality for higher reliability (HRLLC). 5G NR will introduce increased subcarrier spacing resulting in shorter transmission slots and a shorter HARQ round-trip time enabling higher reliability. Complementarily, more effort in both LTE and NR is invested to further reduce the processing time required in the upper layers of the protocol stack.

Fraunhofer IIS is focusing on providing solutions for reducing the total latency and increasing the reliability of wireless communication systems to meet the stringent time requirements in industrial environments.

With location awareness becoming an essential feature of many new markets, positioning is consequently considered as an integral part of the system design of 5G mobile networks. Increased contextual awareness of goods, parts, machines and workers enables an unprecedented degree of interaction and collaboration.

Therefore, Fraunhofer IIS is working on advanced accurate positioning technologies to provide flexible solutions for diverse positioning use cases with varying requirements. Novel approaches for sub-meter accuracy allow for tracking of mobile devices in indoor and urban areas when traditional approaches like GNSS are not accurate enough or not available.

The 5G positioning framework will integrate a multitude of sensors based on both, cellular signals and 3GPP independent techniques. 5G NR allows for a groundbreaking positioning performance by providing high bandwidths for precise timing, new frequency bands at mm-wave, massive MIMO for accurate angle of arrival estimation and new architectural options supporting especially positioning. Improved levels of accuracy, robustness and latency can be achieved to meet all the new application requirements that cannot be realized today. 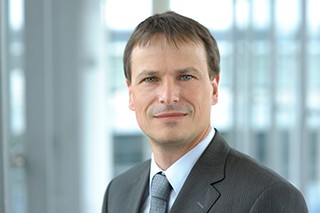 Head of Broadband and Broadcast Department