Switches may well no longer go “click” in future. One of our teams has successfully managed to develop cost-effective high-tech 3D magnetic field sensor chips that will allow switching, turning and tilting motions to be perceived magnetically without any contact at all. This will make wear a thing of the past. The new sensor chips are uniquely precise, because they contain several sensing elements that eliminate interference from outside.

The rotary dial on the microwave, the joystick for video gaming or the button on the satnav – switches in various forms are part of our everyday lives. But for all their variety, they generally have one thing in common: they are mechanical. In the case of the rotary dial on the microwave, for example, the number of watts is set via an electronic sliding contact. There are disadvantages to such mechanical controllers and switches. As a result of the motion, the material wears over time and the switches fail. Furthermore, commercially available switches usually work only in one direction or dimension – they can be either turned or moved back and forth or tilted to the side. For modern applications, however, there is a demand for inexpensive wear-free switches that can be moved in all spatial directions as well as rotated. An example is the button in cars that operates the on-board computer, which designers wanted people to be able to turn, push and tilt in any direction so that they could select many functions in a natural, intuitive way.

For such applications and many more, our scientists in the Smart Sensing and Electronics research division have developed magnetic field sensors over the past few years that employ magnetic fields to measure the motion of switches or other objects without contact. The basic idea is to fit a switch or other component with a magnet so that its position and motion can subsequently be measured. The latest development is a measurement chip on which no fewer than four 3D sensors called “pixel cells” are integrated. “Our 4-pixel-cell chip measures with unprecedented precision in all dimensions,” explains Hans-Peter Hohe, group manager at Fraunhofer IIS, who developed the new chip together with his colleague Dr. Markus Stahl-Offergeld and a team of experts.

Simple magnetic field sensors have been on the market for over 50 years. However, they can perceive movements in only two dimensions – for example, when a magnet moves past from left to right, or when it comes closer to or moves further away from the sensor. Complex movements as in the satnav button of the future are beyond its capabilities. “Thanks to the four pixel cells, we’re now able for the first time to measure the movements of a magnet in all six dimensions,” Hohe emphasizes – first, in the x, y and z directions, which is to say forward and back, left and right, up and down; and second, rotation around these three axes. “That means we can fully capture the movement of a magnet, which opens up many new application areas,” Stahl-Offergeld adds. The technology is based on something called the Hall effect.

Such measurements do in fact become possible only through the combination of the four pixel cells, because this enables disturbance variables to be excluded. It is these variables that generally complicate the task of measuring a magnetic field precisely. One source of interference is the Earth’s magnetic field, for example, which constantly changes slightly over the course of driving a vehicle from one place to another. And temperature also has an effect on measurements. If the temperature falls, a magnet’s field expands. A single sensor could incorrectly interpret this as a movement of the magnet – as a magnet that is apparently approaching the sensor. Such errors can be excluded by combining several pixel cells in a suitable manner.

With the combination of four pixel cells on one chip, the researchers have opened the door to the mass market, such as the automotive industry. For anyone looking to solder four individual sensors on to a printed circuit board, it would take a lot of time and effort to align them so precisely with each other that no measurement errors occur. This would make manufacturing time-consuming and expensive. With the new 4-pixel-cell chips, which will soon be made available for purchase by the High-Performance Center Electronic Systems, such elaborate assembly becomes obsolete.

However, the team is not only targeting the mass market, but also has sophisticated high-tech applications – such as magnetic field cameras – in its sights. Such cameras are capable of measuring the field of magnets with millimeter precision. This is important because magnets need to have very uniform magnetic fields for challenging applications such as in electric vehicles. The new 4-pixel-cell chips have the advantage that the distance between the individual pixel cells is only around a millimeter – approximately half the distance that is usual for magnetic field cameras today.

To manufacture the field of view of a large magnetic field camera, dozens of pixel-cell chips are soldered alongside each other on a printed circuit board. The smaller the distance between the chips or between the pixel cells, the higher the resolution of the camera – and the more precisely a magnet can be measured. “In industry, there have long been calls for higher resolution. With the 4-pixel-cell chip, which we have developed with an industrial partner, we’re setting new standards,” Stahl-Offergeld says.

Through the design of the new chips, the team has also made application easier. The individual 4-pixel-cell chips can be linked with each other according to the daisy chain principle. This means that not every chip has to be connected to the controller via its own cable; rather, the information in the chips can be read out successively through a single data line – that is, via a BUS system. This greatly simplifies the assembly of cameras. At present, the controller that reads out the sensor data is fitted as a separate component on the printed circuit board. In the next generation of chips, the controller unit is to be integrated into the chip. When that happens, the sensor will not just deliver magnetic field values, such as are useful for camera applications, but will directly supply the position of the magnet, which will further simplify the production of “non-click” switches and similar products.

How can movements be measured in six dimensions?

What is a six-dimensional position measurement and what is it needed for?

2 | The combination of the four pixel cells makes position measurement robust against interference.

3 | The chip opens up new fields of application both in the mass market and in the high-tech sector. 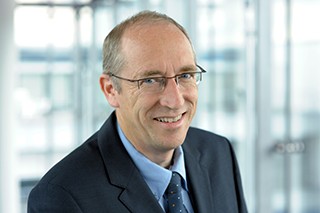 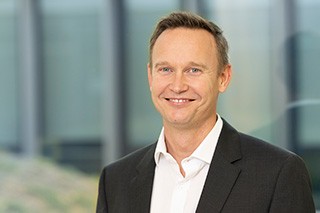