Fitness game for the physically impaired

Erlangen, 2. Februar 2015 – Modern IT has the potential to make fitness training more varied for people with physi- cal limitations. But what exactly is required? Fraunhofer put this question to thalidomide victims, and developed new IT-based fitness training technology in close collaboration with them. The method motivates users with elements found in computer games.

A test subject rocks her upper body from left to right. She rotates her shoulders in little circles. Suddenly she cries out: “Did it! New record!” She has just beaten her personal best in a computer adventure. But this is no ordinary video game flickering on the tablet computer’s screen in front of her: Behind all the excitement is a new kind of fitness tool for the physically impaired. The game’s required movements help the woman exercise motor functions, train concentration and coordination, and improve fitness and stamina. “She controlled her on-screen avatar with the movements of her upper body and the aid of our smart shoulder pad,” says Andreas Huber, scientist at the Fraunhofer Institute for Integrated Circuits IIS in Erlangen. Fitted inside the pad are small sensors that record each movement of the test subject and wirelessly transmit them via Bluetooth to the tablet on the table in front of her, where software processes all the data and relays it to her avatar.

Huber’s shoulder pad is part of the akrobatik@home project. Other elements of the IT-based fitness game, which was created by the firm Exozet Berlin, include a special seat cushion developed by project partner GeBioM for controlling the game by means of weight shifts, voice controls from the Fraunhofer Institute for Open Communication Systems FOKUS that enable users to navigate through the game’s menu, and a video communication system from the company Bravis that allows users to interact via webcams. “Nearly fifty percent of adults in Germany suffer from physical impairments of a temporary or permanent nature, whether as result of accidents, injuries or illnesses,” observes Huber. Under the motto “The New Future of Old Age”, the German Federal Ministry of Education and Research (BMBF) is sponsoring research projects for technical solutions – such as akrobatik@home – that help and enable people to be physically active.

Research in collaboration with users

“Our project is not just about developing innovative technology, but about starting with concrete needs,” says Karolina Mizera, who coordinates the project centrally from the Center for Responsible Research and Innovation in Berlin, which belongs to the Stuttgart-based Fraunhofer Institute for Industrial Engineering IAO. “The prototypes were created in conjunction with people who know very well what it means to live with physical limitations: thalidomide victims.” These volunteers were willing to share their personal strategies for coping with the challenges of everyday life and to develop ideas for technical assistance systems together with Fraunhofer researchers on that basis. Some of them are missing limbs as a result of damage caused by the drug thalidomide, while others suffer from hearing impairments. “These specific disabilities led to concrete ideas,” explains Mizera. Three ideas were implemented by the researchers together with the thalidomide victims, Heidelberg University, and physiotherapists from Reha-Zentrum Lübben rehab center: The “e-bag”, an application for tablet computers that makes it easy for users to show their tickets on buses and trains, a mobile signaler that enables communication with hearing-impaired people even when they are out of sight, and finally akrobatik@home, the largest of the three projects.

The pad adapts to every shoulder size and shape and contains some very clever electronics. Researchers have fitted sensors for every conceivable movement, whether rotational, vertical or horizontal. “While users play, they unconsciously do the exercises recommended by therapists. The playful approach is designed to motivate people to keep repeating the movements on their own initiative. After all, they’ll be looking to improve their scores,” says Huber, while the volunteer beside him rotates her torso as she makes her way through a warren of caves.

The research project comes to an end this spring. So what’s the next step? “What was unusual in this case was that there was no clearly defined technical goal at the outset,” says Mizera. “Our focus was on closely integrating end users into the process and thereby developing technical solutions that are genuinely helpful and above all gain acceptance among them. The project has shown how important participation is in terms of involving users and stakeholders before starting the technical development stage. Recent research agendas have been emphasizing the very same thing, including the EU’s major Horizon 2020 framework program for research and innovation.” Now the researchers want to explore other applications for their technical findings. This includes developing advanced control technology for commercial video games and testing how the sensor technology could be integrated directly into clothing. 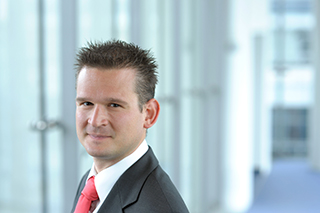