Fast as a puck, hard as ice hockey: Real-time tracking for live analyses

Nuremberg/Munich – Germany: On a typical pass in ice hockey, the puck hurtles across the ice at high speeds. Retrospective analyses provide more clarity. For the first time, the American Ice Hockey League NHL can now display various match analyses in real time. A 20-strong research team from the Fraunhofer Institute for Integrated Circuits IIS makes every movement in the game measurable – up to 2,000 times a second. Thomas von der Grün, Norbert Franke from Fraunhofer IIS and Thomas Pellkofer from jogmo world corp. will be receiving the Joseph von Fraunhofer Prize for their work. It will be the seventh time in a row that Fraunhofer IIS will receive this prize.

How does the defense formation react to the line of offense? How fast does the puck travel over the ice? Analyses and game evaluations are essential in competitive sports. So far, however, these evaluations could only be done after the puck has been in play. At the "2019 Honda NHL All-Star Weekend" ice hockey matches in San José, USA, from January 24 to 27, 2019, fans and experts experienced a new dimension of data analysis for the first time. The data of players and puck were analyzed and processed in real time – an absolute novelty. In the course of 2020, the system will be installed nationwide in all 32 stadiums of the professional ice hockey league "National Hockey League NHL".

The necessary technology for this was developed by a team of about 20 researchers from the Fraunhofer Institute for Integrated Circuits IIS in Nuremberg, Germany. It is marketed by jogmo world corp. A New York spin-off in which Fraunhofer IIS holds 25 percent of the shares. On behalf of the team, Thomas von der Grün and Norbert Franke from Fraunhofer IIS and Thomas Pellkofer from jogmo world corp. will be receiving the Joseph von Fraunhofer Prize.

"We have placed a transmitter in the puck that sends a signal to a total of 16 receivers distributed throughout the stadium," explains von der Grün, head of department at Fraunhofer IIS. The special feature lies not only in the real-time analysis and the large number of traceable players, but mainly in the high tracking rate. With the new feature, the position of the puck can be measured 2,000 times per second. At a puck speed of 140 kilometers per hour, this means: every two centimeters. The system determines the player's position 200 times per second.

But what can be done with this data? "There are three analysis levels," explains Franke, group leader at Fraunhofer IIS. "First of all, there is classic tracking, questions like: How fast did the puck move? However, our system goes far beyond that. We can also include a second level – our analysis." How long does it take for a player to take the puck and score? In the future, according to the scientists' plan, the system will also cover the third level – the tactical analysis of game moves.

For fans, this means that there will be an additional element of suspense added to the game. For professionals, the new technology offers a lot of potential. The real-time tracking of the players performance will enable a special perception training. For example, the goalie can optimize his positioning during training. However, the system's use is by no means limited to sports. "By going for the fastest team sport – and thus also and indoor sport – we have chosen the most difficult application," says Pellkofer. "We are, therefore, also able to handle other challenging tracking tasks."

Fast as a puck, hard as ice hockey 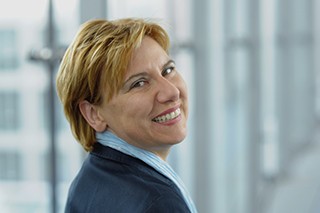