The Fraunhofer Institute for Integrated Circuits IIS is developing the IoT-Bus with IPv6 support and integrated security concept. It is a communication bus based on EIA/RS-485 and the IEEE 802.15.4 standard, which enables a secure and reliable data transmission of measured values and control commands and connectivity to the Internet of Things. The IoT-Bus forms a cross-media communication protocol and unites the two worlds of WPAN and fieldbuses without complex protocol conversion. The novel technology IoT-Bus is developed as part of the SEEDs project.

IP Communication on the Internet of Things

In the context of the increasing cross-linking and digitization in the fields of Industry 4.0, energy management and facility management, IP capability within the terminal node is becoming more and more important. The Internet of Things (IoT) has specific requirements on data rate, range, reliability, cost, flexibility, interoperability and in certain cases also data security. Consistency of the protocols and seamless data-flow across different domains is essential to enable the IoT. Internet connectivity holds security risks in manners of data manipulation and cyber-attacks.

Data Manipulation Secure Communication on the Internet of Energy

In the area of energy management a simple, but secure and reliable interconnection of local resources, producers and consumers through the decentralization of power generation is becoming increasingly necessary. Especially in cloud-based applications, secure IP-based communication is required. It allows access via IP-capable control devices such as smartphones, tablets or PCs for visualization or control purposes. Fraunhofer IIS is developing a communication bus that allows a direct connection of system components on the Internet besides the local communication. The IoT-Bus reliable transmission at higher data rates and longer distances is possible, as this offer conventional fieldbuses and wireless solutions. Through automatic address assignment and allocation of the installation process is facilitated. If a confidential or manipulation seure data connection is necessary, the IoT-Bus provides standardized cryptological procedures for authentication and encryption.

The use and adaptation of IEEE Std. 802.15.4 the IoT-Bus allows a medium-border communication channel. For 802.15.4 nodes are realized without breaking protocol a comprehensive communication network with both wired IoT-Bus and wireless IEEE Std. Using a special access method allows the IoT-Bus a real-time communication. The serial interface uses the standard EIA-485 (RS-485), but can also be adapted to other interfaces. 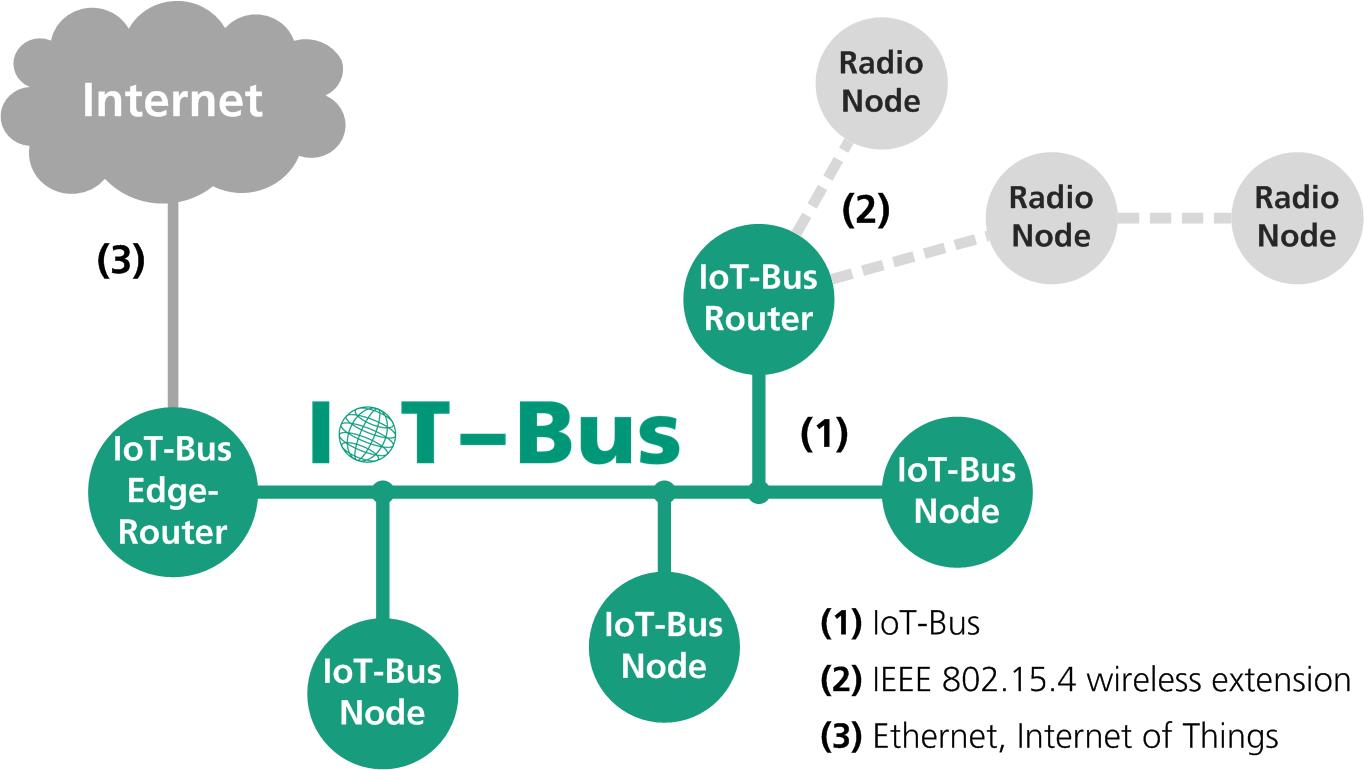 The Structure of the System

The system consists of up to three different physical communication paths, the actual IoT-Bus (1) based on the IEEE Std 802.15.4 with customized bus access method defined by IEEE 802.15.4 radio nodes (2) can be extended and a connection of the internet (3) on the IoT-Bus router.

The IoT-Bus uses 6LoWPAN and thus realizes the IPv6 capability of the terminal nodes. This allows that all protocols which are based on TCP/IP can be used conceptually. The end nodes can be, among other things, sensors, actuators or generally »things« in the context »Internet of Things«. They can simply communicate with the internet or be connected to the cloud.

Additionally the IoT-Bus offers by its data container concept, the possibility of a so-called »tunneling« of messages and protocols, such as CAN message. This functionality can be used for range extension of limited itself fieldbuses. The tunneling of CAN messages is currently takeing place in the SEEDs project.

Contrary to wireless sensor networks and WPAN solutions, the IoT-Bus scores with higher reliability, robustness and greater range for point-to-point connections. Compared to common building automation communication technologies, it also offers real-time communication and additionally IP capability and IT security for the IoT-Bus.

Unique Characteristics of the Communication Bus

With its IP capability and real-time capability, the IoT-Bus is suitable for a wide range of applications within Industry 4.0, building automation and energy management.

With its data container concept it is possible to transfer various protocols. This allows the IoT-Bus to be used as a range extender. This function is already available for the CAN protocol. A packet filter can be used to select which messages are to be transferred from one CAN domain to another.

The IoT-Bus allows interdependent production facilities to exchange information. Existing systems can be retrofitted to IP-capable to be used for industrial applications.

Devices in the building automation system, such as blinds, radiators, air-conditioning and lighting can be easily connected with the IoT-Bus in larger complexes over long distances. The communication for automated and manual control is thus made possible.

The IoT-Bus is suitable for individual lighting control in modern buildings – e.g. "Light As A Service" and "Human Cenctric Lighting".

With the IoT-Bus to Digital Production

As an independent research institute, Fraunhofer IIS supports the German economy in finding the best solution for their problems. The IoT-Bus supports IPv6 and UDP. In addition, the IoT-Bus can tunnel the CAN protocol and thus be used as a range extender for CAN.

The next step is to equip the IoT-Bus with IT security for applications on the Internet of things and digital production and to implement specific application protocols (OPC-UA, MQTT and CoAP). We know how to get the future IP capability, but we only guess your requirements. You now have the possibility, on from the first development phase, to design the features and functions according to your wishes and conditions. We look forward to your feedback and a sustainable cooperation with Fraunhofer IIS. 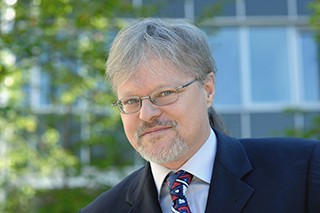