Wireless data transmission systems are being increasingly deployed in industrial and home automation applications. These robust systems are used to transmit sensor data and control information across network infrastructures. In the age of the Internet of Things (IoT), people and things will be intelligently connected to one another, leading to innovations in business and Industry 4.0.

Fraunhofer IIS solutions and IP (intellectual property) address many of the technical challenges in IoT communication, both terrestrially and via satellite. The following section provides further insight into

IoT via satellite – use cases

Existing GEO satellites provide terabytes of capacity worldwide, mainly used for direct-to-home broadcast and internet over satellite connections. The challenge for using such GEO satellites in IoT applications is the path loss between earth and satellite and the slotted nature of the GEO orbit. This results in the need for rather large terminal antennas, with enough gain to close the link and with sufficient directivity to avoid interference into adjacent satellites and systems. IoT applications, on the other hand, typically require low cost and small size terminals and should not necessitate any manual pointing toward a satellite.

LEO and certain HEO constellations operate much closer to earth than GEO satellites. Therefore there is less path loss and thus less terminal power and antenna directivity is required to close the link. This is advantageous in terms of terminal cost and size. However, LEO and HEO constellations come with the drawback of moving satellites, causing a highly time variant communication channel and the need for steerable antennas. Thus an IoT terminal operating in a LEO or HEO network requires both a waveform tailored for the specifics of this communication channel and a suitable antenna design.

Whenever the number of IoT devices in a given network or application is high, controlling the cost per device is of essence for commercial success. For such a scenario, hybrid systems using many low cost terrestrial-only IoT devices in combination with few satellite connected aggregation terminals are worth considering. Use of terrestrial-only IoT technology allows meeting the cost point while the few satellite-connected aggregation terminals provide ubiquitous connectivity. Designers of such systems need to understand both terrestrial IoT and satellite communication, to mix and match the best of both worlds.

In “Massive IoT” applications terminals are deployed in large quantities and thus are under cost and resource constraints. Such constraints include size of the terminal, bill of materials, energy budget for battery-powered devices, permitted transmit power and antenna performance. Typically the amount of data transmitted by each terminal is small and transmissions occur infrequently. Thus, even if the spectral efficiency of the satellite link may be low, each terminal only consumes a small fraction of the available satellite bandwidth.

For most antennas, the beam width is indirectly proportional to the size of the antenna, i.e. a small footprint antenna has limited gain and directivity, thus produces a “wide” beam. This results in unwanted emissions toward adjacent satellites in the GEO arc and other LEO or HEO satellites or terrestrial receivers. Therefore, to mitigate such harmful interference into other systems, direct-to-satellite IoT terminals need to comply with defined power spectral density (PSD) masks. Depending on beam width and pointing accuracy, such PSD masks significantly limit the permitted transmit power, link efficiency, system capacity and the number of IoT terminals in the network.

Fraunhofer IIS has devised a novel solution addressing the efficient use of spectrum and maximizing system capacity in such PSD limited scenarios, considering terminal and antenna type and pointing accuracy. Furthermore, a waveform implementing such concepts has been developed and is available in simulation.

The figure illustrates the FCC 25.226 PSD mask in red. A “narrow” beam (light blue) – e.g. produced by a parabolic-dish antenna with a 45 cm reflector – fits well into the region left unconstrained by the mask, while a “wide” beam (dark blue) – e.g. produced by a small 5 cm  antenna – is significantly constrained by the mask. The figure assumes ideal pointing; any pointing error further reduces the permitted transmit power.

“Critical IoT” applications and aggregation nodes in hybrid terrestrial-satellite systems demand for dependable, low latency and high-throughput connections. These requirements are similar to those for high-throughput satellite (HTS) broadband, but with the additional challenges of using smaller antennas or operating in a LEO or HEO satellite infrastructure. Therefore, additional aspects like low signal-to-noise (SNR) link budgets and time variant channels (variable frequency shifts and path delays) have to be considered when selecting and tailoring the communication standard.

Fraunhofer IIS was actively involved in the development, specification and validation of DVB-S2X. DVB-S2X solutions and IP are available at Fraunhofer IIS for specific markets, including IoT.

The DVB-S2X super-frame format 4 allows robust decoding of the super-frame header (SFH, spread by a factor of 9) and the payload-frame header and payload data (PLH and CUs, spread by a factor of 1, 2 or 5). VL-SNR pilots (P, 90 symbols) may be inserted every 15 payload SLOTs (90 symbols); this allows time, frequency and phase estimation and tracking under variable channel conditions.

High-throughput satellite (HTS) applications require the use of high gain antennas, perfectly pointed toward the satellite of interest. Active antenna tracking and beam repointing is compulsory whenever the ground terminal or the satellite moves, e.g. for terminals used in LEO or HEO constellations or for mobile terminals used on GEO satellites. Active beam pointing capabilities are also highly advantageous to simplify installation of fixed terminals operating on GEO networks.

Size and complexity constraints prohibit the use of mechanically steerable reflectors or electrically steerable phased arrays for “Massive IoT” applications. On the other hand, throughput requirements for IoT are low compared to HTS use cases, allowing compromises on antenna gain and directivity. This favors the use of multibeam antennas that provide adequate gain and beam steering capabilities while keeping antenna size, number of radiating elements and complexity of the excitation network low.

The figure illustrates a multibeam antenna that provides several alternative beam options and that synthesizes one beam toward the satellite of interest.

Thorough understanding of transmission technology, the market needs and the constraints of the target application is vital for the right selection of the features and for building a unique and successful IoT product. Thus, as an equipment or chipset manufacturer, as a network or satellite operator or as a IoT system integrator, benefit from Fraunhofer IIS’ background and know-how in:

More information about the GAIA initiative 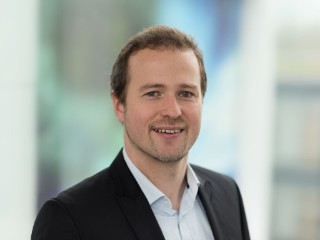