Within the “Nanopolar“ project a nanostructured polarization sensitive image sensor was developed. Based on this sensor polarization information can be acquired for each pixel of every frame.

Polarization is a property of light that is imperceptible to the human eye. However the polarization of light contains valuable information, being captured by this sensor and evaluated by the developed software.

For instance amongst others the angle of polarization is determined for each pixel and visualized as it is depicted in figure 1 (see above) for a microscopic image of a human hair. Thus, changes of the polarization angle for example due to birefringence are detected. Another application is the elimination of glare in images (cf. fig. 2).

Since one metapixel consists of four subpixel with different orientated polarization filters glare should be suppressed at least in one subpixel. Based on the information of these subpixels an image with increased image quality is derived. 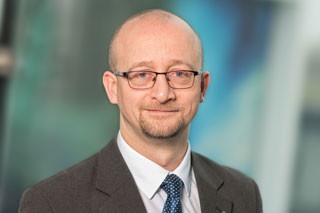