On January 21, 2021, Dr. Bernhard Grill was appointed honorary professor at the School of Business, Economics and Society at Friedrich-Alexander-Universität Erlangen-Nürnberg (FAU). He brings decades of experience and successes in patent licensing to his teaching assignment. His lecture “Patenting for Innovation” addresses questions of intellectual property, in particular patents in research, development and innovation, as well as patent exploitation and international patent politics.

“Innovations need an environment with curious and passionate people who are thirsty for knowledge. So I’m delighted that Dr. Bernhard Grill is joining FAU as an honorary professor,” said Prof. Joachim Hornegger, President of FAU, on awarding the certificate. Prof. Freimut Bodendorf, Chair of Information Systems, adds: “With his outstanding expertise, Bernhard Grill will greatly enrich our information systems teaching and our major research area of digitalization and innovation.”

From as far back as 1988, Grill played a decisive role in the development of the mp3 and AAC technologies. Twelve years later, he received the German Future Prize – Federal President’s Award for Technology and Innovation together with Karlheinz Brandenburg and Harald Popp, on behalf of the wider team at Fraunhofer IIS, for their research achievements as inventors of the mp3 process. With licensing revenues from the mp3 and AAC technologies far exceeding a billion euros, the Fraunhofer-Gesellschaft was able not only to create more than 1000 jobs over multiple decades, but also to found the Fraunhofer Future Foundation to promote innovations in Germany.

Grill became head of the Audio department at Fraunhofer IIS in 2001, while in 2011 he took over the reins of the Audio and Multimedia research area, which in its current incarnation as Audio and Media Technologies is recognized worldwide as a technological and scientific leader in many areas of audio signal processing. In 2016, he was appointed Institute Director of Fraunhofer IIS with responsibility for audio and media technologies. 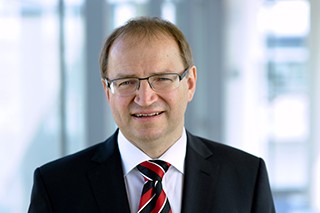