Quantum world sounds theoretical, you might think. And you would be right! But Fraunhofer IIS is bringing the theory into practice nonetheless. By means of quantum computers, for example, which are much faster and more efficient than the high-performance data centers of today. We are developing not only the requisite hardware for controlling the qubits, but also corresponding algorithms – thus bringing quantum computing a big step closer to practical application.

The quantum world cannot be grasped with our everyday experiences – indeed, it actually runs counter to our physical intuition. It was not for nothing that the physicist Niels Bohr observed: “Anyone who is not shocked by the quantum theory has not understood it.” But quantum mechanics can very much be used for practical purposes all the same. Quantum computers are a good example: they are considered one of the key technologies of the 21st century, and researchers worldwide are working on their development. In contrast to classical computers, the quantum computer does not operate with the two binary numbers of zero and one, but calculates a superposition of solutions. Exploiting superposition, entanglement and interference, quantum computers approach things differently than classical computers.

Quantum computers contain a lot of potential for efficiently solving things like complex optimization problems, such as faced by Deutsche Bahn when drawing up timetables. However, there is also a risk with the new quantum computers, as they will quickly and easily crack the kinds of encryptions commonly used today. This is where the field of quantum communication comes in, which is devoted to facilitating secure information transmission in the long term. It works like this: If information is transmitted via quantum states, it is possible to determine whether somebody is eavesdropping. If somebody drops into the communication uninvited, as it were, they destroy the original quantum state and alter the system – which is promptly detected. Quantum sensing in turn uses the sensitivity of quantum systems for measurements that are more precise by many orders of magnitude than classical sensors, such as used in measuring temperatures or magnetic fields.

At Fraunhofer IIS, we use our expertise twofold: we develop the requisite hardware for controlling the individual qubits, and we develop the algorithms. And we are already thinking of future applications today. “For controlling qubits, we use high-frequency technology,” explains Dr. Thorsten Edelhäußer, head of research planning at Fraunhofer IIS. The requirements are no joke: not only does the high-frequency technology have to be very low-noise, it also must be designed for extreme temperatures – after all, quantum computers often work at very low temperatures just barely above absolute zero. In addition, researchers at Fraunhofer IIS are working on suitable control electronics that generate high-precision signals free from phase shift for very many channels. Using machine learning methods, the signal shape can be optimized and tasks can be better solved with quantum computers.

But how can the potential of quantum computing be leveraged in industrial environments? This is precisely what our researchers are investigating at the Bavarian Competence Center for Quantum Security and Data Science (BayQS), which was officially opened in April 2021 and has been granted 17 million euros in funding by the State of Bavaria. Other partners in the initiative are Fraunhofer AISEC, Fraunhofer IKS, the Technical University of Munich, Ludwig-Maximilians-Universität Munich and the Leibniz Supercomputing Centre of the Bavarian Academy of Sciences and Humanities. “We’re investigating and developing quantum algorithms for relevant problems, such as time series forecasting, improving mobile communication data transmission and positioning and evaluating complex sensor systems,” Edelhäußer explains. To this end, the Fraunhofer-Gesellschaft and its partners have exclusive access to an IBM Q System One quantum computer with 27 qubits – the first system of its kind in Europe, situated at the German site in Ehningen. We are using this quantum computer in the QLindA project by the German Federal Ministry of Education and Research (BMBF): together with Siemens AG, we are working on the development and testing of quantum algorithms for reinforcement learning to solve problems – such as control optimization in process industry, the use of distributed automation systems in the smart factory, and optimization in production planning.

In the Munich Quantum Valley (MQV) project, we are working with partners – again supported by the State of Bavaria, with funding of 300 million euros in total – to develop special components for more powerful quantum computers, which are based on three different technologies: superconductivity, neutral atoms and ion traps. “The interdisciplinary team of various research institutions is pooling Bavarian expertise and covers the entire development, from the algorithmics and the electronics to the actual quantum systems,” Edelhäußer says. In short: at Fraunhofer IIS, we are creating paths to bring the technology of the future quantum computing from theory to practical application. 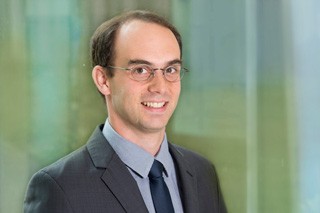